The Etain in heavy seas - testsession 3

The Etain in heavy seas - testsession 3

Oh, what I regretted it today not to have tailor-fitted Leo's Etain. In 2 earlier occasions the hip- and knee-contact was fine in the Etain, but now conditions were much more demanding and I missed hip-support (the seat is a bit too wide for me) and also my knee-contact was painful.
Wieger asked me for a sunday-afternoon-paddle at sea; starting at Wijk aan Zee. Conditions were a SW 25-knot wind (6-7 bft.) and down-going tide.
Our plan was to break through 2 zones with breaking waves and than to take a look at the north pier of IJmuiden; just to learn how the sea looks like in the conditions of today.

Well, the Etain could handle the dumping waves and nicely cut through them. Only once I had bad luck with a particular big dumper which sent me almost back to shore. It took me along while hanging in a high brace. The Etain is easy to edge in an extreme high brace like this. Only at the end I almost lost control because my knees were wrenched out of position.
The second surf-zone was much higher but the waves were not in closed formation. So we could maneuver a bit to paddle were the waves did not crest maximal yet. I could gain enough speed up the wave to pass before cresting. After a wave you have a bit of free-fall back to the water-surface; it surprises me how solid the Etain sound when banging on the water-surface. No resonance of the hull or whatsoever. The Etain sounds if she was built very solid.
Maneuvering was a bit demanding as the Etain is a good tracking kayak and I missed hip-contact to give more power to edging and sweepstrokes which is necessary to steer a kayak that is not very maneuverable. What not helped in maneuvering was the strong headwind causing our kayaks to leecock a bit on top of waves. But also when paddling on a flat surface the kayak kept leecocking. Not very serious; and also Wieger leecocked. Anyway we could handle it with corrective strokes. (NOTE dd. 13.10.2012: Afterwards I would like to have this a bit nuanced. After tailorfitting the cockpit for hip- and knee-contact on 12 oct, I can tell that the Etain is very maneuverable, when edged, on flat water. So the problem to steer the Etain in these confused seas was only to blame on the lack of boat-contact. When not edged the Etain tracks very well, thanks to the slight V-bottom. So I guess that being not being able to steer the Etain easy on 30 sept. was due to the fact I could not edge enough.)

Outside the second surfzone we found nice, big ocean waves. A delight to paddle in with the Etain. However, the more we reached the North Pier the more giants we met. These were incidental big waves of approx.3 meters height, sometimes cresting in an enormous dumper. We were happy not to get caught in one of these dumpers and succeeded just to pass these steep waves before cresting by sprinting up the waves. We climbed these waves with our kayaks standing up at about 45 degrees before falling down at the back of the wave.

Probably these waves are the result of incidental sandbanks under the water-surface along the current-lines; pushing up the waves.
As I was clearly not in full control of the Etain, I felt not very certain in these high waves. The waves made me think that they could grow even higher when the tide goes down more and the wind increases a bit as predicted. Being this far out of shore, without perfect grip on the knees and hips, I did not like to get one of these giants to break on my back. As I could not guarantee myself for 100% to hold in a high brace or to roll up, I proposed to turn and go back.

Just after turning a giant crested just 10m down to the coast. Paddling back, I did not really to try to surf as I was looking backwards at the waves to come. Although the sea is rather irregular, I got occasionally into a real nice, and fast surf. And that is what I noticed before on an earlier occasion: that the Etain surfs well on long waves. And the waves were long; out there today. But most of the time I tried to paddle on the back of a wave, especially when entering the surfzones again. When a wave breaks onto me and the Etain, I saw several times that the removable 4th compartment was kicked out. The elastic cords does not help to prevent this; also not when you stretched them until maximum for more security. And I saw why: The underside of the compartment is round as a football. When a wave breaks on top, the compartment is twisted like a roller-ball and when twisted for about 90degrees, it is kicked out. 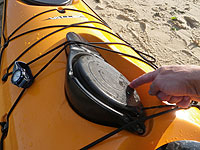 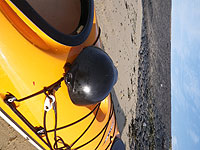 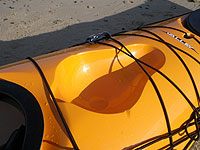 Back on our starting point we rested a bit before entering the surfzone again for surfing and playing around a bit. Here the 4th compartment was again kicked out several times. After an hour we got a bit tired from al these kite-surfers all around us and we quitted.

Today I admired the stability of the Etain in this sea today. And also how she glides over waves.
Afterwards I inspected the compartments: no drop of water to be found. BONEDRY! Not bad at all, having paddled in a sea like this.